Never Graduate Week 2017: how we planned and ran our annual alumni week

Each May we invite the entire Recurse Center community to return to New York City for Never Graduate Week: five days of programming, socializing, and reconnecting with their batchmates and community. This year over 200 Recursers joined us. They represented all 33 past batches of RC, and traveled here from over a dozen countries and forty different cities.

Our community grows by nearly 250 people a year, and so every NGW is bigger than the last. We realized last year that it would be impossible to fit everyone who wanted to attend in our main space without it feeling like a can of computer-adept sardines. Our primary goal became to find a way we could accommodate as many folks as possible during NGW, and which was scalable for subsequent years. A secondary goal was to host an event in which everyone who attended both learned something and taught someone something.

What we ultimately wound up doing was a major departure from Never Graduate Weeks past: we ran a small unconference-conference hybrid for the RC Community, replete with badges, talks, and several livestreams. All of these pieces came together in such a way that we didn’t fully realize (or admit to ourselves) that we were indeed planning a conference until we were nearly finished. And, largely thanks to it being rooted in a wonderful community, it went pretty well! 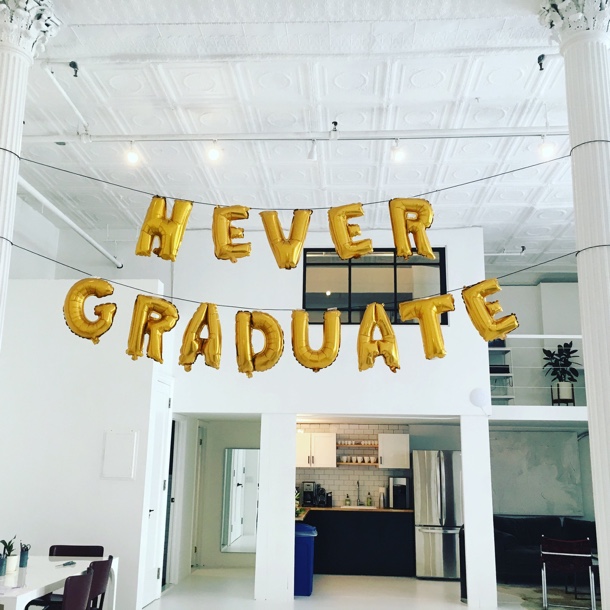 We had over 200 folks attend this year’s NGW. Not counting our labor, it cost us just under $19,500 in space, food, drinks, and giveaways (we made hoodies, custom Scoutbooks, lanyards, and hand screen-printed social rules posters).

We didn’t charge folks to attend, but we also had some advantages over traditional conferences: namely a built-in crew of organizers (mainly Sonali Sridhar, James Porter, and me), one big space, and pool of speakers we knew well and could reach out to, rather than having to solicit proposals. We also didn’t have to deal with heavy-duty registration or check-ins – Nick made a quick RSVP page for our site and we were good to go. All of this saved us time and money.

However, we also only had one sponsor: Squarespace, one of our recruiting partners, hosted an awesome end-of-week party for us at their offices, and sent five of their engineers to do a panel discussion during the conference.

There were three spaces open to folks during the week: our main space, a satellite space, and a smaller quiet space for folks who wanted a quiet spot to rest or program. All of these were within a few blocks of each other.

Our main space was where everyone gathered for the welcome talk and breakfast, the closing talk, the unconference events, Thursday presentations, and our afterparty.

Our satellite space was open from Monday - Wednesday, and was where we held the conference-style talks, workshops, and panels. 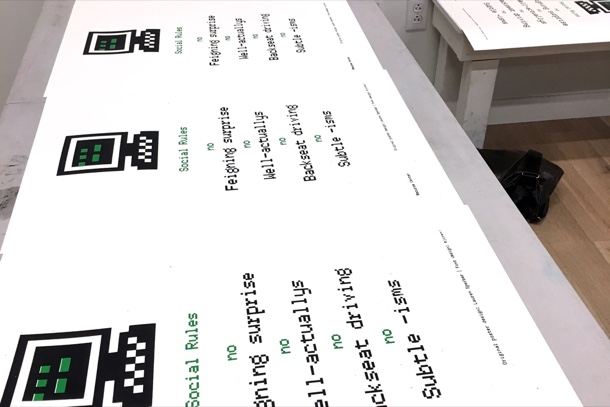 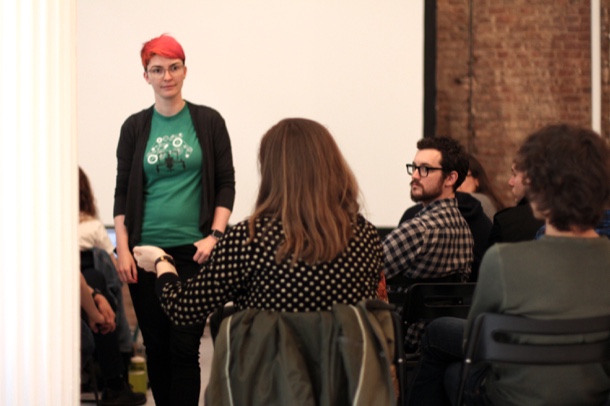 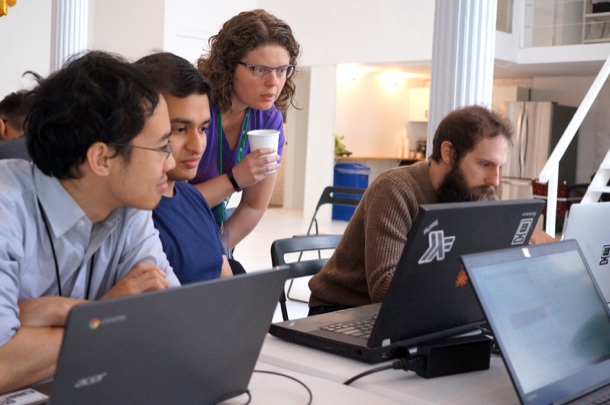 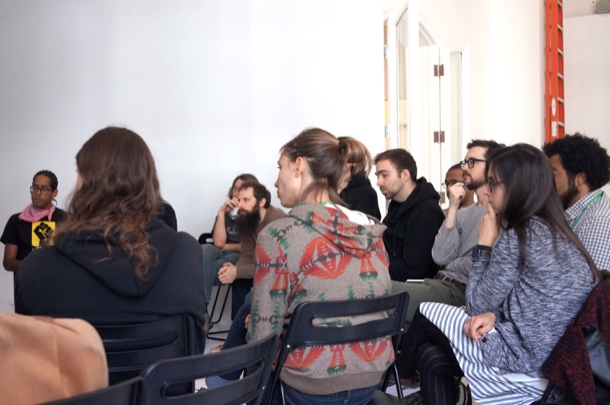 We wanted the scheduled talks to represent the diversity of interests and individuals within our community. Half (9 of 18) of our speakers and panelists were women, and nearly half (8 of 18) were people of color.

Unconferences are participant-organized conferences in which sessions are planned somewhat spontaneously, and are focused on encouraging conversation rather than one person sharing knowledge. There’s no program – attendees register interest in hosting and attending sessions in a central spot as the conference is in session.

We made an unconference wall in our main space, and invited people to post events they’d like to host on it on Tuesday and Wednesday of Never Graduate Week. There were 24 unconference sessions hosted, including a talk on coding with fear, a discussion of great bug stories, a talk and discussion about working for small non-profits, a discussion of computers and DNA sequencing, and a much-needed library reorganization.

We were particularly excited to do an unconference during Never Graduate Week because it echoes the way talks and workshops are organized at RC: nearly everything that happens at RC, from book clubs to code review groups, is initiated and organized by Recursers themselves. 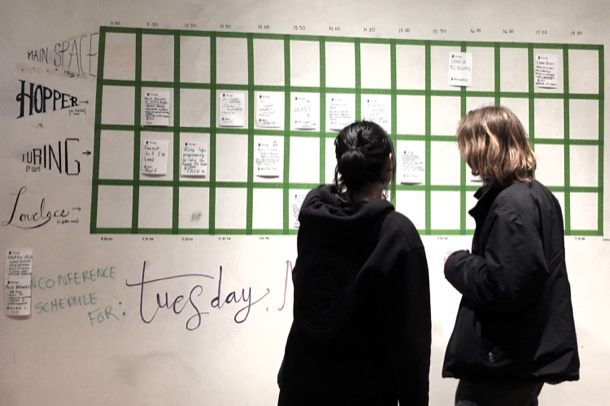 Finally, in a fit of circular inspiration from !!Con, we decided to fill Thursday with a full day of 5 and 10 minute talks from alums in the style of our weekly Thursday evening presentations.

We filled every spot but one! Alums gave 24 presentations. A few choice titles: 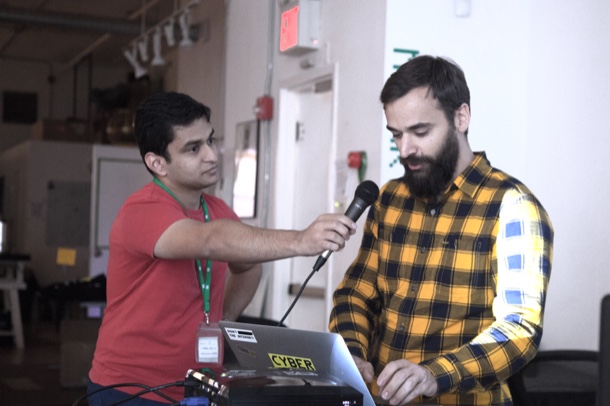 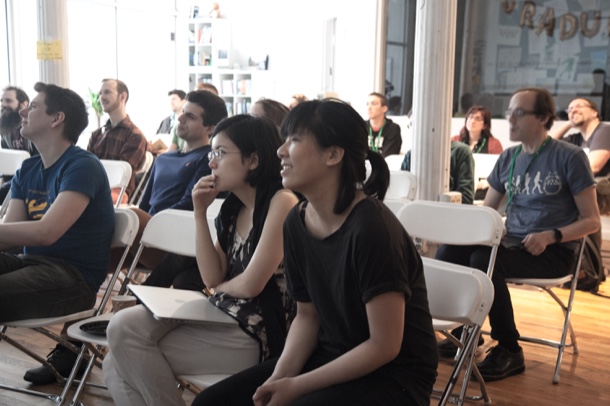 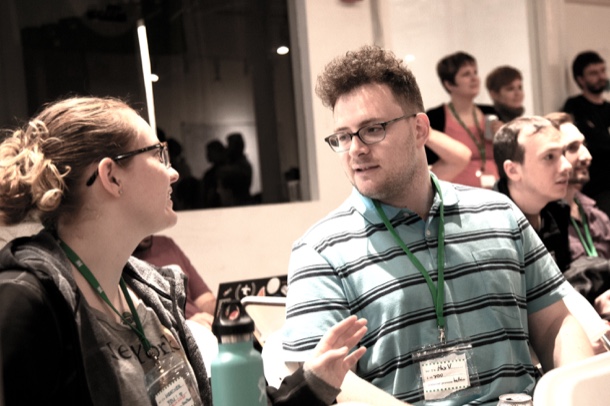 Two important aspects of Never Graduate Week are that it allows folks to reconnect with people who were in their batch, and it allows folks who have never met one another (in person or at all) to meet and work together. We chose, by hand, two to three people we thought folks should talk to based on their interests, and sent them to everyone who attended NGW in person the weekend before they arrived. We also hosted a bunch of social events throughout the week, including a Game Night and a picnic.

Much of the work of facilitating social interactions is providing a good substrate and scaffolding rather than micromanaging people and events. We view the RC community as more of a biological system than a machine: if we give people a good environment that’s diverse and balanced, they’ll flourish.

It’s also helpful to have a lot of alumns who are fantastic DJs floating around – one of them, Marko Stamenovic, F2'16, provided the soundtrack to our afterparty, to great acclaim.

Lots of alums can’t travel to New York for Never Graduate Week, and we wanted to include them as much as possible. We livestreamed our opening and closing talks, all of the talks in our satellite space, and all of the unconference events in two of our side rooms in the main space, Lovelace and Hopper. While it wasn’t perfect, nothing exploded, which we’ll count as a win. We also had streams dedicated to discussion of topics we covered in roundtable discussions. We also sponsored alum meet up dinners in London and San Francisco for the folks who couldn’t make it this year.

What could have gone better

What’s in store for next year

Never Graduate Week will continue to get bigger as RC grows. I view attendance and interest in NGW as a measure of the health of our community: the more folks who want to attend, the better we’re doing. That means that we’ll be planning for an NGW with more space, more participants, and more fun social and technical events in 2018!