In this series, we sit down with current Recursers to learn about the work they’re doing at the Recurse Center and what they’re most excited about right now! For the second installment, we talked to Laura Tessin. An electrical engineer by training, before she came to RC Laura was helping to launch satellites into orbit. 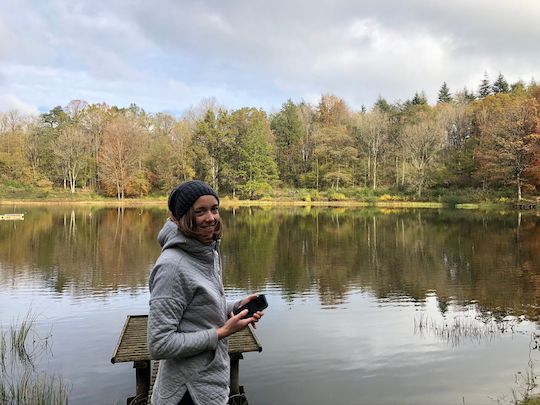 My background is in electrical engineering. I finished my masters in Germany about three years ago and afterwards I moved to San Francisco to work for a startup that builds a satellite subsystem. It was pretty cool! When I started there, I was employee number 15 and then we grew to 70 people or so. This past summer, we launched our first two satellites. I was part of that development, which was very, very exciting.

My main job was to help with the integration of the satellite, both the hardware and the software side, since we were developing both the ground software and the onboard software. My job was to bring the two together and check that everything was working from the ground to every single payload. With about five payloads per satellite, that was a really interesting job.

When you study electrical engineering, the focus is usually not on software. We did have a couple of systems classes and we did learn some C++, but I discovered that I’m not the hugest fan of developing embedded software.

My dream job would involve working with hardware, but on a high enough level that I could use Python. My last job actually did fulfill that! I feel like for me, software is great, as long as you have hardware on the other end and you can actually see what your program is running on. It’s really cool.

I first heard about RC four or five years ago and I thought it sounded amazing. I read about it on Julia Evans’s blog, where she described the different things she did each day, and what she learned. I thought it was so cool that you could actually focus on a specific topic. There are no deadlines, and no pressure in the form of a test at the end or anything like that.

So I discovered it and then I kind of forgot about it again. Then this summer after the satellite launch, I felt like I had this big achievement that I was done with and I wanted to take a break and see what comes next.

I remembered RC and I thought this was the perfect moment. I had the time and I wanted to see what else is out there. Because I’d been using software as a tool to interact with hardware, I wanted to focus more on programming itself. I wanted to take the time to actually understand more of the principles behind the work I’d been doing.

So RC was the perfect next step, I would say.

Coming into RC, I was very excited about taking the time to build my own Python project. I’m still excited about that, but now I’ve discovered like four different new things! I’m working through Full Stack Open and learning JavaScript, which is a completely different language and works very differently than Python. And I discovered the weekly creative coding group, which I’m really excited about. It’s a great reason to just do something for fun!

An animation Laura made at RC

I’m excited about traveling again. This year was the first time in a long time that I could go back to Germany to visit my family, which was really beautiful.

You can see more of Laura’s work on her website and GitHub.