In this series, we sit down with current Recursers to learn about the work they’re doing at the Recurse Center and what they’re most excited about right now! For the third installment, we talked to Meri Leeworthy about how her experiences as an artist, activist, and new mom led her to programming. 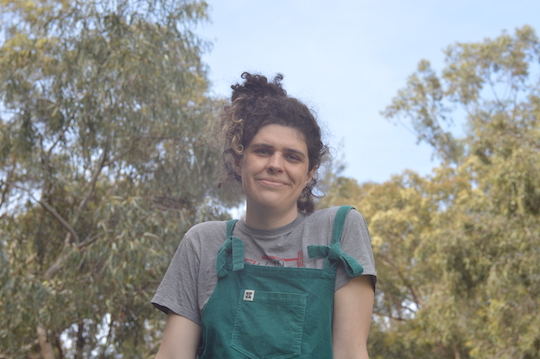 I have a background in both art and activism. I was making performance art for a while and I started to use some different technologies in my performances. At one point, I bought a second-hand receipt printer and I spent a long time trying to find a hacky way to customize it — and to do that live, causing it to glitch out as part of the performance. So I was doing that in Python and that’s one thing that made me realize I really enjoy programming.

I’ve also been exploring a few different sides of activism for years now. I worked with some direct action campaigns and mutual aid projects. More recently, I worked with an organization that supports LGBTQ+ prisoners to create a newsletter distributed among people in prison, which is a really important way of trying to build connection and community and solidarity in a highly controlled environment.

Over the last couple of years, I’ve focused on creating a participatory media platform for grassroots organizers. The goal is to create a community-owned platform that can better support communication and knowledge sharing among organizers. It’s an infrastructure project in a way, similar to how people run social centers or community radio.

There are other people on the project, but I’m the only developer. When I started working on it, I had really limited knowledge about web development, but I just kept iterating on the idea to build different proofs of concept, learning new tools and tech stacks along the way. I went from working with all JavaScript to starting to learn TypeScript and GraphQL and taking on more complex projects from there.

One thing is that I have a baby now. I realized that I would like to keep doing programming while supporting my family, and that maybe a good way to continue learning over the long term would be to have a job. It’s kind of funny thinking about getting a tech job when most of my experience has been in this activist context, so I was interested in doing something that from the perspective of employers would legitimize all of the work and learning that I’ve done on my own, as well as continue it. That was one reason for thinking about RC.

The other reason is that I was really interested in going deeper on some tricky parts of the project that I’ve been working on and having some time to really dig into it, as a way to both further my learning journey and make that project happen.

I’m really excited about conflict-free replicated data types (CRDTs), and I’m lucky that a few other people in the batch share this interest. Also distributed systems in general, which I had not learned about at all before starting RC. A lot of the peer-to-peer networking software community sits really in line with the values that drive me to do the work that I’ve been doing, in terms of undermining existing power structures and using technology to support communities to be more autonomous.

So it’s been really exciting learning about CRDTs, especially how they can support peer-to-peer offline collaboration. I’ve also been learning about the Secure Scuttlebutt protocol and other decentralized data stores, which has been really interesting.

I have a feeling that my baby is going to start laughing soon and I’m really excited for that to happen. Also taking them to swimming classes.

You can see more of Meri’s work on her website and GitHub.