In this series, we sit down with Recursers in batch to learn about the work they’re doing at the Recurse Center and what they’re most excited about right now! In this installment, we talked to physicist Ashley Li about her interests in machine learning and cultural theory. 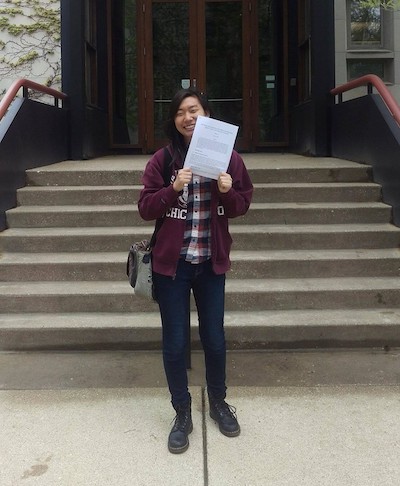 I recently graduated with a masters in physics. Thus far, basically all of my work has been in academia doing research. My specific area in physics was dark matter detection so that’s taking detectors from deep underground, analyzing the particles they see, and hoping for something that hasn’t been seen before.

I’m also starting to get involved in digital humanities, which has always been an interest of mine. I’ve been learning and contributing to various research groups on internet culture.

I had just graduated and I felt like my programming knowledge was a bit ad hoc. I always learned what I needed for each project, but I never really had the time to do machine learning by itself in any formal way or in the form of personal projects. I wanted the opportunity to work on just programming that I’m interested in, alongside other people.

I have an ever-growing list of things! One of the most consistent things I’ve done throughout RC has been the electronic music group. We meet weekly to work through a course on electronic music theory, make music ourselves, and talk about it. I wanted to have part of RC be a creative outlet and explore the things that just made programming fun. At the beginning, I thought this would be more of a side quest but it’s been really interesting and I’ve learned a lot.

I’m really excited about machine learning. It’s a cool field, it’s a great statistical tool to use in research, and it has applications in many different types of research. I’m also exploring ways to use it to produce cultural artifacts by itself.

ML is typically described as a black box, which I don’t think is entirely right. Personally, I think it should be treated no differently from any other statistical tool for analysis. The ways that it gives predictions are not obvious to human observers, but that’s true of most statistical tools. There’s an expectation that machine learning should tell you why something happens.

At the same time, there’s a certain degree of complexity to it that gives it some autonomy that works pretty well in art. So it’s interesting to me as both an analysis tool and as an object of study in its own right.

Earlier, I mentioned my interest in Internet culture research. The Internet has changed the way society and culture function and I’m interested in cultural critiques specific to the Internet — for instance, meme studies.

I’m interested in the functions of Internet content and memes and modes of affirmation, such as upvotes and likes. I think it’s particularly fruitful to look at through the lens of the Frankfurt school of critical theory, which was developed in the mid 20th century with a major focus on critiquing the culture industry. It’s still relevant now, even though time has passed and the historical context has changed immensely.