We’re excited to announce that we have Star Simpson in residence this week, and that Tim Abbott and Marijn Haverbeke will be joining us at the Recurse Center as residents later this fall!

If you’d like to attend the Winter 1 batch to work with Marijn and other residents like Star and Tim, apply to the Recurse Center. Keep an eye on our blog for more resident announcements!

Star is a currently unafilliated electronics hacker and aviation enthusiast with a passion for the potential transformative power of applications for drone technologies. She was fed Perl as a baby before discovering embedded programming and has been trying to unlearn habits learned therein ever since. She’s currently in residence (10/5 - 10/8) at the Recurse Center, and is working with folks on Haskell and Swift projects.

Tim was the CTO and co-founder of Ksplice, which developed technology for updating a running Linux kernel without rebooting that was running on over 100,000 production servers when it was acquired by Oracle in 2011. After Oracle, he co-founded Zulip, a powerful group chat application, which was acquired by Dropbox in 2014. Tim is currently the technical lead for Dropbox’s main server platform. In his spare time, he advises startups, enjoys hiking, cooking, and board games, and leads the Zulip open source project. He will be in residence at the Recurse Center next week (10/12 - 10/16), working with folks on Zulip. 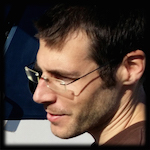 Marijn is the author of Eloquent JavaScript. His technical interests range from programming languages to distributed systems to databases. He runs a small lifestyle business around his open-source projects, such as Tern, CodeMirror, and ProseMirror. He’s made important contributions to the Rust compiler. He will be in residence at the Recurse Center from 11/16 - 11/19.