We’ve signed a 10-year lease on a new space at 397 Bridge Street in Downtown Brooklyn. We’ll be moving there in late summer.

RC is an unusual business, and that’s reflected in what we need in a space. We weren’t just looking for an office for RC employees: our space is primarily a community hub, both for people currently attending our retreat and our alums. Before we started our search, we came up with hard requirements for any new space.

First, it had to be highly accessible to our alums and future Recursers. It’s important to us to be in a location where alums can drop in on their way to or from work to program after hours or attend an event. Any space we rented had to be accessible to current Recursers 24/7, and close to public transportation. 397 Bridge will have a similar entry system to our current space, is within a few blocks of 11 subway lines (including several ADA accessible subway stations), and is ADA compliant.

It’s also essential our space is comfortable for all Recursers to use and work in. That meant having good natural light for folks working at their computers all day, heating and air conditioning operable 24/7, having gender neutral restrooms, space for a lactation room, and more dedicated rooms to take phone calls.

We also wanted a lease of five or more years. The lease on our current space was also for five years, and it went by quickly — we didn’t want to move RC into a new space just to have to move again a few years later.

Finally, we wanted to move into a larger space that was still affordable. This meant we had to move out of SoHo! Committing to a 10-year lease means that we needed to find a space we could imagine growing into. Our current space is 5,500 square feet, and at times it feels tight. The space at 397 Bridge includes two adjacent floors, and is 10,000 square feet.

Quiet work and spontaneous discussions are both integral parts of RC. Having two floors will allow us to simultaneously support folks who are working quietly and folks who are collaborating.

Though we know this will probably change over the course of the next decade, our current plan is to use one floor as a social space: it will have a kitchen, dining area, presentations area, our computing cluster, a living computer history museum, several meeting rooms, and some desks for pairing. Conversations and pair programming will be encouraged. We’ll also use this space for first day welcome talks, job fairs, end of batch celebrations, and game nights.

The other floor will be a quieter working space: it will have two phone booths, a library, and a few meeting rooms, but will mainly be open with lots of desks, like the main area of our current space in SoHo.

More space will mean that alums will feel more comfortable knowing there’s a desk for them when they stop by during alumni hours to work. Having two floors also means we’ll be able to host social events without disrupting folks who’d like to program, and at hours that makes them more accessible to parents and folks with family obligations in the evenings. We’ll have more opportunities to open RC for technical talks and daytime events.

Finding a space that fit the bill wasn’t straightforward: we saw over twenty places in Brooklyn and Manhattan before we found 397 Bridge Street. We’re excited that it ticks all the boxes on our requirements and our nice to haves, like being near inexpensive food options, hardware/electronic stores, banks, and parks, and being closer to neighborhoods that are more affordable for Recursers to live in.

We often describe RC as an ecosystem, because so many important aspects of it have evolved over time as the result of our community’s ideas and efforts.

Our current space, 455 Broadway, was RC’s first long-term space. Over the past five years, the hundreds of Recursers who spent time here made it a home: they decorated the space with art, created a programmable room, and brought in more hardware than we could accommodate. You don’t need to spend very long in our current space to see the many ways Recursers have helped shape its use, and how its contours in turn help create important parts of the RC experience. 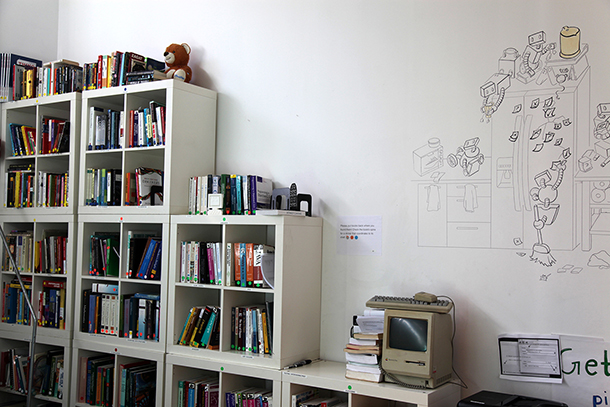 Our library, with mural by Monica Toth

Moving presents a subtle but significant challenge for RC because it means wiping away all that history and starting fresh. We’ll be documenting our usage of 455 Broadway over the next few months, and will bring as much of what makes this space great along with us.

Ultimately, RC is constantly being defined and redefined by Recursers themselves. When looking ahead to the next 10 years of potential challenges in defining our new space, we like to remember the words of Jane Jacobs:

Cities have the capability of providing something for everybody, only because, and only when, they are created by everybody.

We think this is true of RC, too. It will take work and time to make a home of 397 Bridge: part of the reason we wanted to make a 10-year commitment to a new space is that we understand that it takes time to grow into one. We’re confident that with the help of our alums and future Recursers over the next decade, 397 Bridge will become an even more wonderful version of RC.